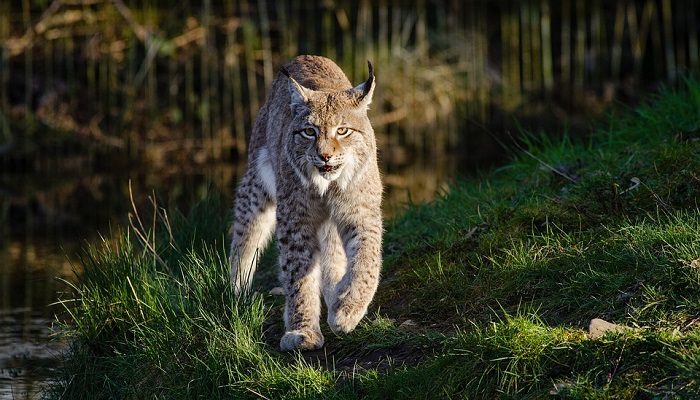 Bobcats are beautiful felines of the Lynx order. These medium sized cats inhabit vast spaces of lands from southern parts of Canada to Mexico. Most of bobcats live in the United States.

These beautiful predators are not fearful animals and they could even be found roaming near edges of urban areas, while they also live in deserts, woods and swamps.

They are highly adaptable and skillful. There are many accounts on seeing bobcats near people’s homes; they would even enter yards, climb up to house porches and curiously look into people’s homes.

They usually feed on small prey animals, such as rabbits, rats and other rodents, but there are times they would even hunt a deer.

These beautiful predators are crepuscular and they usually move actively during twilight.

However, they do change their behavior throughout the seasons.

Although these stunning felines were excessively hunted for their lavish fur, their population showed quite resilient and they are not endangered species.

Beautiful bobcats have always been amazing to humans.

Not only because of their breathtaking looks or adorableness of their young ones, but also because of spiritual energy ascribed to these felines.

Bobcats are featured in many Native American stories and they play a significant role in folklore of these people. 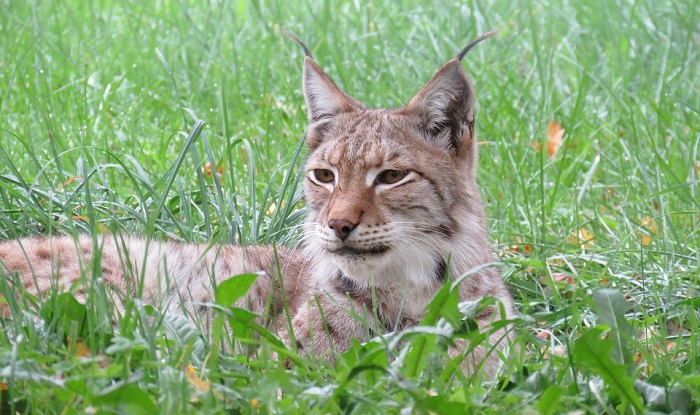 Bobcat is an important character in many of Native American legends. It is commonly portrayed alongside the Coyote, as its opposite. These two animals represent powerful natural forces with mysterious properties, the fog and the wind.

In Native American folklore, bobcats are sometimes seen opposed to coyotes. Both of these animals represent important natural phenomena;

However, there are other versions and interpretations of folklore depictions of these two; some other sources describe them as equals.

Regardless the way story about the Coyote and the Bobcat might be interpreted, there are others telling about bobcats legendary relations with other creatures.

Shawnee tribal legend tells about a bobcat outsmarted by a cunning little rabbit. The story explains how have bobcats got their spotty coat;

According to the tale, trapped rabbit persuaded the bobcat to make fire, which ended by scattering its plain fur by sparks. Native Americans believe dreams about strong and agile animals give them some special powers.

Some tribes worship cougar and lynx as deities and believe these animals possess great spiritual powers.

For Mohave people, dreams about bobcats are fortunate and interpreted as a good omen for a successful hunt;

Even people who have never seen a bobcat in reality are fascinated by proud posture and extraordinary appearance of this stunning feline.

Bobcats are respected for their skills and characteristics, but people are also afraid of their sharp teeth and claws.

Cleverness and intelligence – Bobcats are intelligent animals and they use all of their wits to catch prey. They are masters of stealth and ambush. Bobcats use both patience and tactics to succeed, which are traits to respect. They rely exclusively on their own abilities and skills, since these impressive felines are solitary animals.

They seem to have special connection with forces of nature, which is the reason they are admired and respected by Native Americans.

Solitude and patience – Bobcats are solitary animals. They are self-reliant, strong and resilient. In addition to their hunting tactics and behavior, these cats are quite well adapted to almost all of environmental conditions. As we have mentioned, they live in deserts, semi-deserted areas, forests and near urban areas.

They are resourceful and able to survive difficult conditions without being harmed.

In addition, bobcats represent patience. They symbolize the importance of ability to be still and wait.

That makes them skilful hunters and survivors. Bobcats teach us the value of life, the importance of carefully used time and all the advantages of patience.

Playfulness and trickery – Bobcats are clever and cunning, so they also play tricks. They represent trickery and brilliance of mind. In symbolical sense and applied to people, this is a dangerous and very useful trait to have. To be a successful trickster, you must have sharp mind. These smart felines sure do.

However, they are also playful in the most innocent way.

Joy and motherly love – Little bobcats appear so adorable rolling over the grass. These cuties are a symbol of family joy, happiness and carelessness. Bobcat moms are caring about their young ones, so this union symbolizes motherhood, love and support.

Bobcat females care about kittens and make sure to prepare them for all the challenges in life.

Bobcat people are sharp minded, tactical and straightforward people who do not hesitate to speak up their mind.

They are very intelligent and always have bright ideas or great plans.

Above all, they know how to implement them. Bobcat people have a lot to say and they enjoy social situations.

They are active, but know the importance of patience.

Bobcat people have brilliant minds and always offer ingenious solutions. They work well with others, but only if their opinion is the one that matters most.

They are authoritative, but not in an aggressive way. They know how to use their charms and inspire other people.

They always stand their ground and never give up easily.

Sometimes they are stubborn in their intentions.

Bobcat people have great imagination and skills to apply their ideas in reality. People love to listen to them, although they are not as compassionate as others are.

However, when it comes to love life, they are devoted and very attached to their perfect one.

In addition, they are patient and ready to wait for the right person, not minding to spend long time without a partner.

These people are remarkable and charismatic. They love to catch attention of others, but prefer to somehow always stay outside the group. They veil themselves with mystery.

Bobcat people are artistic, chic and unique. They prefer their solitude, but are not introverted at all.

There is a kind of bravery in such a life.

Bobcat personalities are playful and have a positive attitude. However, they change their minds easily, when it comes to relations with people around.

They could use their brilliant trickery skills to make confusion, in order to get what they want.

This trait makes them dangerous, especially because they are highly intelligent.