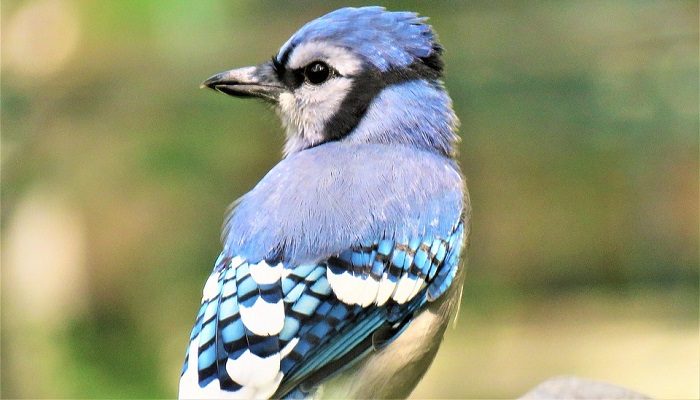 A blue jay is a small, predominantly blue bird, native to North America. Its length is 9 – 12 inch. This bird has a distinctive crest on its head, like a crown made of feathers.

The crest raises and lowers, depending on the birds’ mood.

When a blue jay is agitated or excited its crest is fully raised. When the bird is frightened, the crest resembles a brush and it bristles outwards, and while doing its usual daily activities, such as eating or resting, its crest is flattened on the head.

This bird is very noisy. It’s also bold and aggressive.

It’s not a very fast flier and that’s why can be easily caught by predators.

Blue jays are known to make sounds to alert other birds around, when they see some danger. They can impersonate the sounds of other birds, especially some hawks, to scare of other birds or to test if predators are nearby.

They are known for their aggressive behavior towards humans who approach their nests or do something which provokes their sense of security.

They do everything they can to chase away owls or other birds which make their roosts near them.

They are also known to kill smaller birds and some bat species.

Blue jays are extremely territorial birds and won’t give up until they chase away everyone from an easy meal they desire to eat. They can also steal other bird’s eggs, chicks and nests.

During their stealing acts, they tend to make loud noises and create a lot of confusion, so they would be more successful in their intentions.

They are very curious and intelligent birds. They stay with their partner all their life. 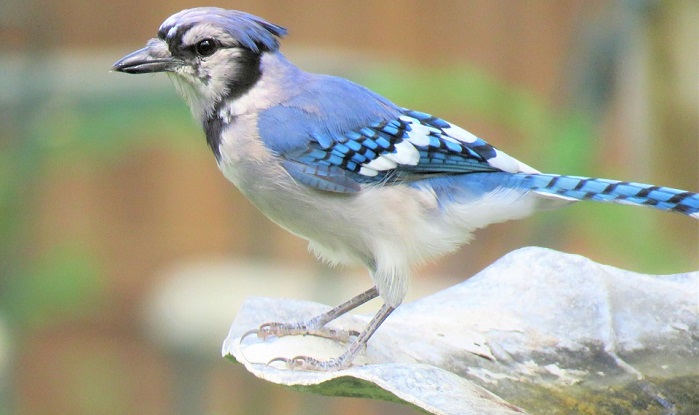 What does the Blue Jay Symbolize?

The Meanings of Blue Jay as a Spirit Animal

The Blue Jay as a spirit animal can have many different meanings.

Here are some of them:

Courage and fearlessness. Blue jays are courageous and fearless little birds, unafraid to confront much bigger threats when defending something they consider important, such as their young, their partner or their territory. This bird teaches you of the importance of having courage to defend the things you value, regardless of the treat you might be facing.

Intelligence. These birds are considered very intelligent and you probably share that trait with your totem animal. You probably cleverly manage your way out in different situations.

Faithfulness and loyalty. Blue jays are known to be with one partner all their life, so they embody the traits of faithfulness and loyalty. If this is your spirit animal it reminds you of the importance of being true to yourself and your partner. It also reminds you to appreciate the bond the two of you share by being loyal and faithful to your partner.

You are probably loyal to your friends and family members. A blue jay is a symbol of long lasting and happy relationships.

Resourcefulness. These birds are not very picky about their food and living space and they will make their nests wherever they see an appropriate place. They make the most of every environment, and that is why they are considered very resourceful. Resourcefulness is a trait people with this spirit animal also possess.

If you have a blue jay as your spirit animal, you probably use every situation to your advantage.

You probably have a vast knowledge on many subjects, and for that reason, you are a pleasant company.

Determination. These birds are very determined and they use all their abilities to get what they want. If you have a blue jay as your spirit animal you are probably determined as well, and you don’t stop until you achieve your desires.

You should be careful not to use any inappropriate means to do so.

Persuasiveness. These birds use all means to persuade others to respect their desires, from brute force to sneakiness. But they manage to get what they want in the end. You are most likely very persuasive when you want something and you know exactly how to get it.

Aggressiveness and misuse of power. Although blue jays are very courageous and determinate which are their good qualities, they can also be overly aggressive and behave like bullies towards anyone coming their way. They tend to confront anyone and don’t stop until they scare away the presumed intruder. Maybe you tend to behave in a similar manner.

This bird as your spirit animal teaches you to calm down your temper and stop behaving as arrogant and aggressive as you usually do. People might start avoiding you because of that.

Trickster. This bird is a real trickster, doing all it can to get away with its sneaky acts. You also might have a bit of a tricky nature if this is your totem animal.

Blue Jay as Your Totem Animal

If a blue jay is your totem animal you are probably a very determinate and courageous person. You deal with any situation without hesitation and fear and you usually get out as a winner.

You are not afraid to confront much stronger opponents than yourself, and you don’t stop until you achieve victory.

You are probably a faithful and loyal person. You are family oriented and you respect your relationship and your partner.

Most likely you won’t have many relationships in your life, especially if you find a suitable partner early in life. You don’t have many friends as well, but the ones you have, you treasure for life.

You are very protective of the people who are important to you, and you will do anything to protect them.

People who have a blue jay as their spirit animal usually enjoy gabbing. You are most likely very communicative and eloquent. You might even speak more than one language.

Usually people who work in sales, politicians, public speakers, teachers or lawyers have this bird as their totem animal.

You are probably a person who adapts easily to any kind of situation, not making a big deal out of it. You use your intelligence and all available resources to make the most of any situation.

As a blue jay person, you probably seize every opportunity which comes your way, without hesitation.

You are driven by success and you are usually victorious in all you do.

What if the Blue Jay Appears in Your Life?

When a blue jay happens to come into your life, you might be getting a message to learn how to adapt and learn quickly in various situations.

You need to learn how to survive with all you got at that moment and with the less possible effort.

This bird might be an encouragement to take on some risks in order to seize some opportunities.

Maybe it appears because you need to be patient in some situation. It might also be a reminder to respect your partner and appreciate your relationship more.

Sometimes a blue jay appears at times when you are in some kind of danger and you need to defend what’s yours.

This bird’s appearance in your life might be a reminder to stand up for yourself and raise your voice. Don’t be afraid to tell others what you want.

A blue jay in your life might also be an announcement of your spiritual growth.

When to call on Blue Jay?

You should call on Blue Jay as your spirit animal when:

Dreams about blue jays often indicate being aware of not being honest or true to ourselves about something. These dreams might be a message to clear your thoughts or admit something to yourself.

Maybe they indicate the need to become more honest and direct.

Sometimes a blue jay in your dream represents your personality and depicts you as overly confident and arrogant.

It can also indicate being too aggressive and conflicted.

This dream is a warning to control your behavior and stop acting like a bully, because you might scare away people that way.

In some cases, this bird symbolizes a person in your environment with similar traits and behavior.

Sometimes this bird is calling you to pay attention to something important you might have overlooked for some reason.