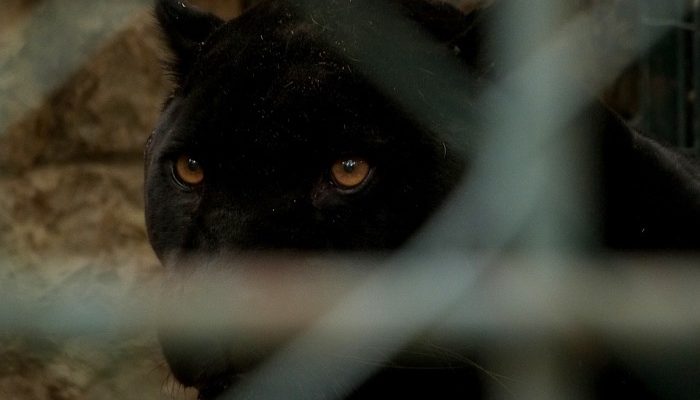 Elegant and dangerous, black panther is certainly one of the most beautiful felines in all of the animal kingdom.

However, many people make a mistake, thinking black panthers are separate specie; the truth is, these extraordinary black beauties are leopards and jaguars, only their fur is black.

If you look at black panther’s coat in a bright sunlight, you will notice the usual pattern of a leopard’s fur behind the black coating.

The truth about black panthers is that these beauties are actually leopards, only their fur has this remarkable black coating, thanks to a specific gene responsible for distribution of dark pigment within the animal’s hair;

Did you know several species of big felines can have black coat and they are all often considered black panthers?

The most remarkable and known black panthers are leopards inhabiting some areas of Africa and Asia, as well as jaguars living on South American continent.

Therefore, we can conclude, a ‘black panther’ expression is only, well, an expression, used to describe exceptions in commonly patterned feline species.

Black panthers actually do have spots, just as their patterned relatives, only those are not so easily visible. The characteristic black color of their fur comes from excess of melanin, a pigment responsible for tanning of skin in humans;

If you see a black panther (a leopard or a jaguar) resting in jungle shades, where sunrays barely touch their fur, or in the distance, these felines appear as a completely black animals.

These elegant velvety black predators are not as common as their relatives are.

They are more likely to be seen in Asia, but all of them are generally a rare sight. This uniqueness makes their symbolism especially powerful. 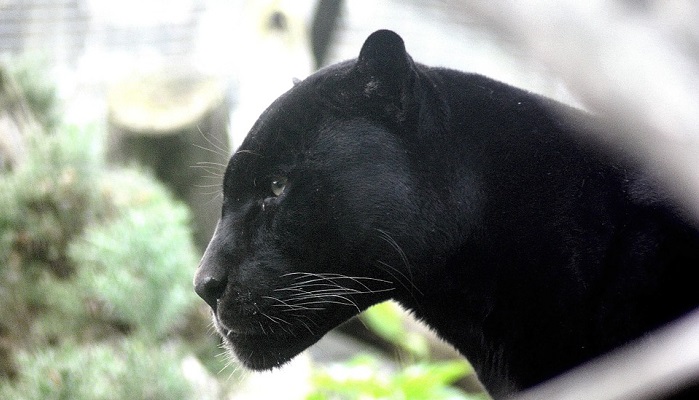 Big felines represent glorious ideas and concepts in many different cultures around the world.

Black panthers have a special ‘ingredient’ incorporated within that symbolism and that is their black fur.

They are commonly featured in heraldry, arts, as well as in mythology and folklore.

Although black panthers are rare, they are worldwide known, because of their beauty and uniqueness. People describe these cats as some of the most impressive members of the animals’ kingdom.

No wonder why, really!

Black panthers represent all the ideas their spotted and stripped cousins symbolize, but with an addition of mysterious blackness that makes their symbolism more magical and spiritual.

Black panther motifs appear in heraldic and in many different modern designs.

For example, black panther tattoos are popular amongst people who would like to accent their courage and fearfulness or other traits associated with the dangerous animal they believe they have or desire to have. In a way, panther tattoos are meant to attract the power of this impressive creature.

One of the most powerful female deities in Ancient Egypt was portrayed as a woman with a head of a black panther. This was Bastet, the powerful goddess of war.

No wander she was depicted with this of strong, beautiful and courageous animal. Ancient Egyptians adored Bastet and worshiped this deity with great passion.

Egyptian goddess Bastet was represented as a woman with a black cat’s head. In addition, this goddess was commonly depicted in a shape of a cat and she is known as a cat goddess, as well.

Black panthers were popular symbols in Ancient Greece and Rome, as well. One of the less known Greek deities was Ailuros. Ailuros was similar to Bastet of Egypt. It was a warfare and protection goddess associated with impressive panther.

Romans have also had admiration for this incredible creature. They often used it as a motif for decorating their tombs and temples.

Carantanian panther was a symbol of principality of Carantania (medieval Slavic principality located in the area between Austria and Slovenia), a heraldic motif from twelfth century.

It is a stylized representation of this amazing animal and it is still used on standards of Austrian Styria.

In late twentieth century, there was an idea of putting a black panther on Slovenian coat of arms.

Black panther tattoos, as a symbol of courage, fearlessness, aggression and strength, are popular in gangs and groups that think of themselves as dangerous and better to stay away from.

On the other hand, black panther tattoos could represent femininity, elegance, beauty and mystery. It depends exclusively on a desire of a tattooist’s client, of course.

Some of the meanings of black panther tattoos are:

This is an interesting usage of a black panther motif as a powerful symbol. Black Panther Party (Black Panther Party for Self Defense, original title, or simply BBP) was an African-American revolutionary organization founded in mid sixties of twentieth century.

Its purpose was to protect African-Americans from police brutality.

The choice of a symbol was perfect; a raging black panther was used in their logo, symbolizing strength, freedom and resistance.

Representatives of BBP declared their desire for freedom and power to manage their lives on their own, without being oppressed on racial basis;

Black panther symbolism could be interpreted similar to that of a leopard or a jaguar, with an addition of specific meaning that is characteristic for most of black spirit animals.

As you might suggest, black color is associated with darkness, mystery, death and even malice or dark, black magic, but also with elegance, magic, spiritual journey, inner depth and so on.

No doubt these beautiful big cats are powerful symbols.

They are extraordinary and rare, beautiful and dangerous, strong, agile, intelligent and natural born survivors. Let us see what do they symbolize.

Mystery and darkness – Just as other black animals are associated with secrets and mystery, so black panthers are. These magnificent felines are true masters of stealth and rulers of jungle shades.

Everything black is commonly associated with magic and dark forces, but also with spiritualism and mystical powers in general.

Black panthers are favorite animal spirit of people who deal with spiritual things, seek for deeper and upper knowledge. Black panther symbolism is a complex of spiritual interpretations of leopards and jaguars and symbolism of black animals. They are associated with darkness, night, secrets and hidden knowledge.

Black animals are often believed to be able to communicate with forces that are unreachable to humans.

They are appreciated and valued, but also feared of, because of such ideas. No black animals are an exception, including black panthers.

Beauty and uniqueness – Black panthers are unique and rare, so they naturally represent such concepts. Their velvety black coat makes them exceptions amongst their relatives and gives their impressive appearance even more beauty.

Black panthers are elegant, their moves are delicate, silent and soft and all of that is accented by their blackness. These astounding felines are an example of dangerous beauty by all means!

Danger and fear – Black panthers might appear sophisticated and elegant, but these are animals you do not want to provoke. Although they would rarely attack a human being without a purpose (e.g. need for self-defense or protection of their cubs), if it comes to that, your chances are miserable.

Panthers are dangerous. They have strong jaws, agile and fast bodies and sharp teeth. They are ultimate killing machines. Beautiful, but dreadful, in a way.

Black panthers’ hunting skills are impressive. They master shadows and are stealth hunters; they rarely chase their prey, but rather wait for it to approach and become reckless.

They represent hidden threat and disguised danger. Their black color gives this symbolism even stronger power.

Survival and agility – As we have already mentioned, black panthers are survivor. They are solitary animals that rely exclusively on their own skills to survive. It makes them even more dangerous and impressive to humans. Black panthers are fast and agile, true predators.

They are watchful, patient and silent and they symbolically represent all of these concepts.

Intuition and insight – Cats in general are usually associated with mysterious forces, deep knowledge, insight, and intuition. Big cats are not an exception, especially mysterious animals such as unique and rare black panthers. Their skills and natural characteristics, along with their black coat, make them powerful symbols of intuition and spiritual guidance.

Black panther spirit animal is a powerful one. Its powers are similar to those of a leopard, only accented by the fact they are black. Black color gives additional mysterious force to animals of that shade.

They are associated with magic and energy beyond our imagination, so their spiritual powers are even greater.

People born under Black panther totem are exceptional individuals others admire and respect, but are also afraid of them. Their personality is strong and influential, even if they prefer to keep out of the spotlight.

There is something in their character and appearance that magnetically attracts other people to them. Black panther people are not as gentle and sensitive as some others are. They are proud, self reliant and solitary.

They find it hard to make bonds and relationships, not because they are not social, but because they value their freedom above everything else.

Black panther people mostly rely on their intuition. They are intelligent and tactful, but when it comes to final decision over a matter, they would trust their heart.

They like to think through things and observe every aspect of a subject or a situation, but in the end, they would let their intuition decide. Black panther totem gives them that inner energy and deep insight, so they rarely make a mistake doing so. They have good instincts, but also great knowledge and experience.

All of that combined make them successful people who know what they want and how to achieve it.

Black panther people express strong willed and confident individuals, worth of looking up to. They are born to lead others, although not all of them would gladly take the role of a leader.

Sometimes, they are satisfied with quiet success and do not want to stand out.

However, it is hard with such an impressive personality. Even their veil of mystery they like to dress attracts and inspired others! If they are leaders, they became protective. They are loyal, honest and just.

Black panther people are noble. They would never intentionally hurt other people’s feelings, but once they are provoked, it is better to move out their way. They could be aggressive and even scary to others. You don’t6 want to annoy a black panther person, because if you do so, you will certainly get what you deserve.

Black panther people are decisive about every aspect of their life. They stand up for themselves and protect people they love and admire.

Black panther people are strong both mentally and physically. They are very active and love to experience new things. They are adventurous, but not rushing.

They sometimes take risk, but it is not so typical for Black panthers. They are courageous and brave. These individuals are very self-aware and they know what their capabilities are.

They are never easily seduced, hurt emotionally or shaken by outer influences.

These people appear elegant, sophisticated and mysterious. They are unique and astounding. Their charisma is strong, although they do not but much effort in being noticed.

Black panther people are not pompous and do not perform shocking deeds to impress.

They express good manners; they are classy and have an exquisite taste. They are true role models for many people.