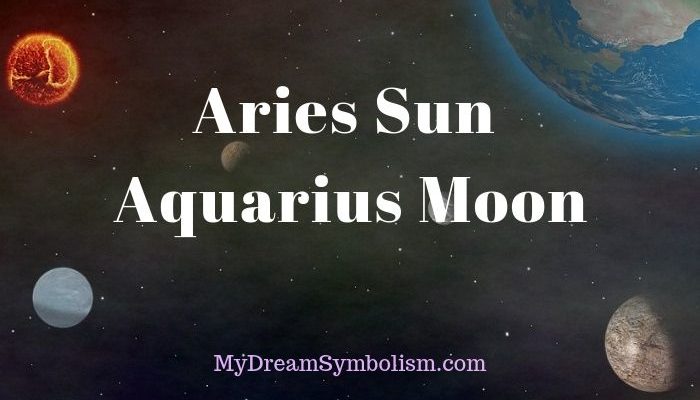 With Moon in Aquarius and Sun in Aries, freedom is written on the banner in speaking as in doing. They say it out freely, what they think, especially if their feeling is involved.

Then, when something is important to them, convention is not what matters to them, but they are generally friendly and open to others. Their love of freedom makes them even sympathetic to others.

People with Moon in Aquarius and Sun in Aries, seem to carry a promise of greater freedom from the shackles of the normal in which everyone else is trapped. They have a strong need for exchange, equality and a partnership based on camaraderie.

Only then can they bring together their great need for self-employment and a binding relationship. Your home is usually a meeting place for friends and is open to group activities. Beware that the love of freedom does not become stubbornness, or an irrational need for freedom is enforced at all costs.

Sun in Aries and Moon in Aquarius are definitely an interesting combination. Basically, you are peaceful, but definitely with a penchant for self-expression. Your will is strong and often stubborn. You want to be something, not necessarily the first, but you want your qualities to be recognized.

You are a special person who can surprise others with their opinions and ideas. Sometimes you really want to enforce something that ‘ordinary mortals’ do not understand.

But you do not grossly ignore others because you are naturally friendly and socially minded. You like it when a wave of renewal of social, political or social nature comes through.

In love things you want to lead, and your feelings are quickly awakened. But you need a wide-ranging independence and self-determination in a partnership, otherwise you feel quickly narrowed. More about this combination in my book.

The moon in the zodiac sign of Aquarius entails that you need a lot of freedom as an independent being. You love your freedom, your active mind wants to roam free, and your soul can not tie up.

You approach other people openly and curiously and quickly make friends, but usually stay a little bit in the background.

They like to move in groups of like-minded people, where there are common interests and emotional matters do not play a big role. Violent emotions – one’s own and those of others – are skeptical and usually negative. 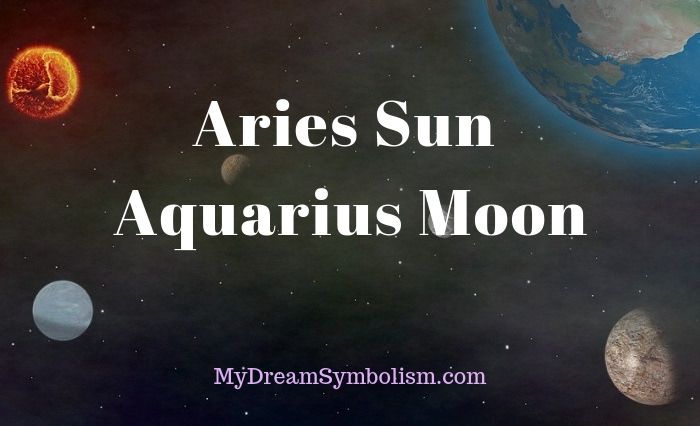 Her dealings with the world are more rational and analytical. The feelings are mercilessly subordinated to the mind. Your social environment will probably bring you great sympathy, but you may also seem a little unapproachable and self-centered.

Her thinking and feeling is rather unconventional. They are not so easy to put in a drawer. You want to avoid that at all costs. They have a penchant for originality and individuality, but are also very aware of it and like to feel special.

The feeling of being different from the others can also be a sign of attachment anxiety: those who are free and independent have nothing to lose either.

With your pronounced need for freedom and independence, only those people who have enough self-confidence and generosity to deal with such idiosyncratic free spirits and their escapades can handle them well.

In love, you are easily flammable, but do not be too deeply involved. You always have the emergency exit in view, in case you get too tight in the relationship. Basically you are looking for love without commitment.

With a partner who, like them, appreciates his independence and also desires much freedom in a relationship, you can live a harmonious and inspired love beyond conventional relationship structures.

At work, you are happy to bring in your joy of experimentation and creativity. They want to create something new, work on forward-looking ideas. It may like to approach unconventional and provocative, because that corresponds to your urge for originality.

You would like to work in a team of people who work like you, in a friendly atmosphere of like-minded people. They want to change the world, make them better. They are often an inspiration for your environment.

The mother of an Aquarian Moon-born is experienced as independent and freedom-loving. Although she is physically present, quite loving and maternal, but certainly not extremely cuddly and physically. Rather buddy as a mother lover.

Yet, somehow, it is not quite there, yet this not-all-being-being is not unlike that of a Pisces-moon that hovers in another world, but rather, this aura surrounding the mother springs from her yearning the unlived life, a life, a task, a job that she might have chosen much better, but now stuck here with her maternal duties and tried the best to make it.

We always speak of extremes, it is important to understand the basic attitude of the mother. The bond between child and mother may well be intimate in the first years, but at the latest with the onset of adolescence, the teenager with all the more violent rebellion will break away from the mother, want to take a different path than this.

The fantasy world is unfortunately often hidden from the environment. Due to a lack of emotional boundaries, people are shuttling between extremes. One is dependent on external consent, but on the other hand one exaggerates with opposition. It is difficult to create the right distance to the environment, which should be dubbed by frequently changing contacts.

Due to difficulties in isolating, emotional withdrawal may be indicated. Somatically, this is often manifested by cold feet, as generally by poor circulation of the extremities. One separates between inner and outer world. Masks a masked expression to hide behind or be unassailable.

Aggressive inhibitions and emotional congestion can explode big time. Moods then gain the upper hand and lead into periods of grandeur fantasy and self-contempt. Personal evaluation by others is often understood as an emotional condemnation.

These children go their own way early. The replacement also starts very early. Often, these children have the subliminal feeling that they do not really fit into this world or that they are with the wrong parents. Maybe the mother had a conflict between maternal duties and their own ideas of freedom.

Parents must give this child a great deal of freedom and the need for independence should not be suppressed. Of course, the child should not be neglected. Perhaps the child was conceived to bridge the inner contradictions of the parents.

Then there is a strong attachment to the parents at the beginning, in this case, it takes place rather late, because the child was indeed intended as a family cohesion. So it can be children who adapt too strongly or even those who unconsciously oppose.

The Aquarian Moon opposes the pressure of conformity and seeks the opposite to find its individuality. Good group awareness is present, but not in the local, native sense.

The need to be recognized as an independent person, while losing attention at the same time as being afraid of being unadapt, can lead to a split in the personality.

They rarely depend on their partner, because they are freedom-loving and always want to know a certain amount of personal independence.

Their love is more of a comradely nature and can sometimes have quite cool moves. Physically, they are often very experimental. A too clinging partner, they usually leave pretty quickly.

Even men with moon in Aquarius are unlikely to tie in intimacy. While they may enjoy some original play in it, they are not the most profound lovers. If they have decided on a solid partnership, this must not be restrictive, otherwise they are looking for the distance.

The partnership is usually a challenge for people with moon in Aquarius. You do not get into emotional depth with your partner so easily.

Sensations are easily rationalized, but this cannot always be sustained so that the unconscious can spread suddenly and threateningly. A certain maturity often has to be achieved before the real partnership comes into being.

Your interest in other people is kept alive by a spontaneous feeling for their motives and intentions. Your kind of impersonal way of being kind, does not allow cordial connection immediately, because you love more humanity than the individual.

That may be the reason why you prefer to satisfy your social needs in groups; maybe because you do not want to let anyone get too intimate with you.

Basically, you do not want to be troubled to remain free and inwardly independent of your erratic expressions and your spontaneous actions. That your intimate activities may be missing emotional warmth could be a touchstone in your partnerships.

An Aries Sun with Aquarius Moon is looking for an independent woman who understands him and gives him a certain challenge, but will be able to reap its respect. The type of sign for these people is definitely someone who will not limit them in any way.

Moons in Sagittarius or Gemini is the perfect match, because these partners are going to have a lot of understanding for these unique and free people.

If the Sun is in Aries, the moon in the Aquarius would like to rise into the air, be free and unbound. He feels a bit strange in this world anyway, not really belonging. That’s why the others do not belong to him either, and since he does not like fixed commitment, that’s fine with him.

This basic feeling “I am different from you and that is good” puts the human being with the moon in Aquarius outside of a group.

Here a certain defiance (“I do not want to belong to you”) mingles with a protective attitude (“the most important thing is freedom and independence”). On this basis, it is obviously difficult to enter into intense relationships.

It is only with pleasure that the Aquarian Moon, with a certain contemptuous smile, rises above those who become entangled in their fierce feelings, who depend on the care of another, who most want to die of lovesickness. That cannot happen to him.

The Aquarian Moon always wants to decide freely what it does, when it comes, and when it leaves. The doors must be open to him, otherwise he stifles, and “voluntary” is the magic word. Only no pressure, certainly no emotional!