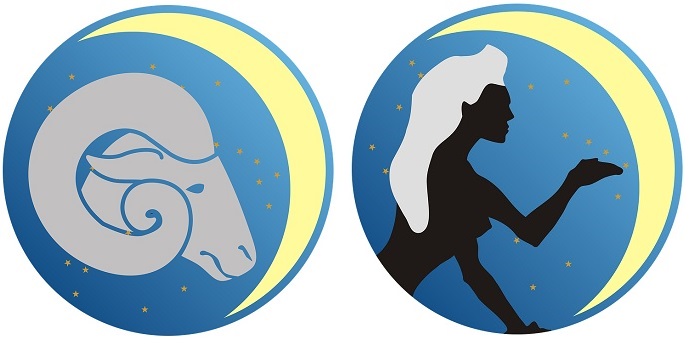 Aries man and a Virgo woman are a risky combination. As these two signs are completely opposite when it comes to many aspects of life, the question is whether they will be able to overcome these differences.

One thing is sure – they both should give some time to each other to better meet, and then give make their minds. Aries man is more into adventures, at least in his younger ages. Virgo woman is, on the other side, the type for a serious relationship. Yet, these two care about each other’s needs, but they diverge when it comes to fundamental issues.

Ruler of the Aries man is Mars – god of war. He gives the Aries man exceptional strength and courage. He enters everything just like he would enter a battle. Not only that he will get caught in a challenge, but he will also win. This man is charming, brave, adventurous, righteous, and you just can’t stay indifferent about him.

Aries man might seem even cruel sometimes, but actually, he is very compassionate and can’t stand to see a crying woman. Under the steel shield, the Aries man hides a kind heart. He is capable of strong and steady emotions, but when it comes to love he might be an adventurer.

This man usually has a strong and muscular body, as the Aries man adores sport. He does some recreation even in his older ages, that is why the Aries man lives long.

Aries man thinks that he knows everything best and doesn’t like criticism. If you give him a good argument that he is wrong with something, it would hit him first. However, soon after the Aries man would be glad to see that there is someone willing to confront him. People shrink back under the Aries man’s energy and listen to him unquestionably. Aries man enjoys this, but sometimes it bores him, as there is no one brave enough to set his/her face against him. To conclude – always speak your mind when you are with the Aries man, as he does the same.

This man is incredibly adventurous and passionate. Aries man would change many partners, but once he would find the one – that is the end of the story for him. This man will get you off your knees with his smile, charm, and potency. Try to be everything but average if you want to attract the Aries man’s attention. Be original and yours, as he would know how to recognize the value in you.

Virgo woman is a serious analyzer and critic. With her strong sense and instinct, the Virgo woman may feel something that is coming, so don’t ever take her for granted. Even if it sometimes looks like she is grumpy, she is actually wishing you well.

This woman is the Earth sign. That means she is practical and thoughtful, efficient, and realistic. If you want to get the job done, ask the Virgo woman for help. She has great organizational skills and knows how to get the things right. Virgo woman will also pay attention to every detail, tending to make everything perfect. Yes, this woman is a perfectionist. It might get on your nerves sometimes, but this side of her character is actually very useful.

Virgo woman doesn’t tend to hang out with her friends all the time. She is more into planning, organization, or spending her time in nature. Sometimes the Virgo woman lives within a pattern, but that is the best way for this type to function.

Unfortunately, the Virgo woman carries a lot of complexes. It makes her think that she is never good enough or that she doesn’t deserve to be happy – what a tragedy. However, this comes from the fact that people don’t get this woman the right way. They say that she is too serious, or arrogant, too tidy or criticize all the time. Only a few of them know what lies beneath. Take some time and you will see how caring the Virgo woman is. She tries to make everybody happy, everything perfect, except her life.

When the Virgo woman meets a new significant man in her life, she changes. She is more open and shows off her communicative side. Virgo woman will seduce him with her intelligence and charm. As this is an impassable side of her character, she would analyze this man a lot before she starts a relationship with him. This is not the type for one-night stands or adventures, but for a serious relationship. Virgo woman is looking for a long-term relationship, so bear this in mind when you try to approach her.
Love and Marriage

As we already mentioned, the Aries man likes adventures when he is a young man. He would like to give it a try with every beautiful woman he meets. Yet, this makes his experience, as this man will ask for a depth in a woman when he gets older. Even though the Aries man wants a family and a secure home, he might want to have fun in his twenties or thirties. When he decides to settle down, he will sail into the nice marriage.

Virgo woman is a woman for marriage. It is obvious that she is not a provocative and notorious type who wanders, goes out to nightclubs, or flirt with many guys. Virgo woman is actually traditional in some ways, but this is something that makes men see her as a potential wife material. She seems stable, honest, reliable, truthful, sometimes too detailed, but in general – the Virgo woman might be your future wife according to all criteria.

Concluding, the Aries man believes that he should take some time to settle down. Virgo woman doesn’t want to marry young, it is better late than never but would prefer to meet the right guy when she is younger. She is the type who would be in a stable long-term relationship 10 years before marriage, just to make sure she is making the right choice.

Probably that we all know the Virgo woman’s need to fix things or to shape something. This side of her personality shows off while she is in a relationship. Virgo woman would always try to make it better and more fulfilling, both for her or her partner. Aries man believes that he has nothing to do or to improve in order to improve the quality of the relationship.

Aries man’s leadership skills might be useful for this relationship. Virgo woman is hard working and serious, so her private life might suffer. She would forget how to enjoy life, as her carrier would occupy her. Yet, the Aries man is a true refreshment for the Virgo woman, as he brings out optimism and positivity within the Virgo woman. She is definitely not an adventurous type like her partner, but she would get a new energy and feel more confident. This leading and dominant side of the Aries man fits perfectly into the Virgo woman’s thoughts about the type of a man for a marriage. She is a strong and independent woman but expects her man to take the lead.

When it comes to the bedroom, the Aries man is a virtuoso. Virgo woman is shyer and closed up, but the fiery Aries man won’t let her stay this way. His volcanoes will warm up the Virgo woman’s desire. This will be a completely new experience for her, but she will enjoy it to the fullest. The same thing will be with the Aries man, too.

Aries man and the Virgo woman would function much better as friends, as they would learn a lot about each there. There will be no emotional attachments, so it would make an easier atmosphere for both of them. Aries man and the Virgo woman are completely opposite. He is furious, impatient, impulsive – does things without much thinking. Virgo woman is, on the other side, shy, hardworking, silent – she doesn’t make noise or produce tension. Yet, they would get along in the friendship aspect despite the disparities.

In the beginning, the Aries man and the Virgo woman would only see faults and flaws in each other. In time, both of them would learn how to cope with the differences and even combine their strengths. Aries man would wake up a sense of excitement and fun within the Virgo woman, while she would teach him how to be more patient when it is needed.

Aries does things without much thinking, sometimes spontaneously, sometimes mindless, while the Virgo thinks too much.

Aries man would take the lead in this friendship, as the Virgo woman likes to estimate the situation carefully and then pick a role. Once these two accept each other’s flaws, their friendship will run smoothly.

Alec Baldwin and Cheri Oteri were in a relationship. This Aries man and the Virgo woman couple made a good looking couple, but their differences were too enhanced for both of them, so none would want to fight for the sequel of the relationship.

Aries Man and the Virgo woman make an interesting couple. They would attract each other in some way but would go on each other’s nerves the other time. It is hard to reconcile these two different natures. If you would want to associate impulsive temper of the Aries man and the calm nature of the Virgo woman, you would need cellular nerves. Yet, it is not true that these two don’t get along at all. Aries man would wake up passion the Virgo woman didn’t know before.

These two can make it through if they teach from each other. Aries man would find this difficult, as he believes he does everything right, but there is a hope that he would change something about himself.