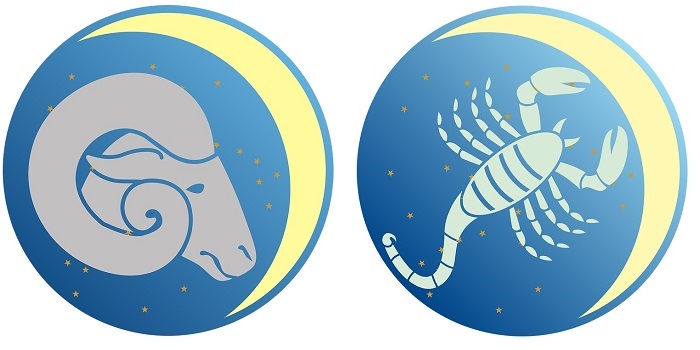 This is quiet turbulent and intense relation between these two signs. Both of the partners are strong individuals with some bad habits. Aries is ruled by planet Mars  and Scorpio as well ( Scorpio is also ruled by Pluto). This strong influence of this planet of war, anger, aggression and intensity characterize these persons with some tendencies that may result as raw and violent.

Each one of them will try to lay down the law so this can sometimes bring stimulation ( as Aries sees everything as a battle and has everything to conquer so will have fun doing that) but sometimes it can bring problems. This is above all strong physical bond as both of the signs are featured with great sexuality and great appetite for sex.

You can always spot this guy in a crowd by seeing him doing  or say something that nobody can. He is brave and fearless, both with his acts and words.

Aries is very open about his attitudes and thoughts and will tell what he actually thinks. Some find it even rude but he likes to make things clear. He attracts many people around him and he is star of the show.

Scorpio woman has great presumption and if she spots him will go and get him. As Aries likes brave ladies he won’t mind this. In fact it will stimulate him even more.

As you can imagine Aries will let the lady to approach him but will let her know that he is the ‘’in charge’’.So, Aries will step up and start to ‘’conquer’’ the girl.

Aries will let Scorpio to take over just for a minute to enjoy all the energy, love,    to meet her sexuality. When he discovers that there are no limits he will be up for anything she says.

He is in search of energetic partner and lover who will be up for his little adventures. He will act in unpredictable and spontaneous fashion that will not always encounter approval.

It is all right to be spontaneous and not plan every single moment but it is good to listen to the needs of the partner.

That is where his eccentric side shows up. It looks like he is centred only on him and his needs. Although he has the romantic concept of love, when it comes to put feelings into action there is just no cohesion.

He is not able to show his affection throughout physical contact just because he separates love from sex. Sex is something that comes naturally between man and woman and it is a pure need, not something that has to do with affection and feelings.

His fidelity is questionable as he likes any kind of love signs and games, flirting but when he decides to settle down require fool fidelity form the woman. That is quiet contradictory as he doesn’t act like that himself.

When older, he will change his approach and eventually change some habits since he would lived enough to settle down.

Aries doesn’t believe in accidental encounters and moments of weakness so he will never forgive cheating. He would instantly walk away and won’t come back.

When there is a problem arising he won’t talk about it much instead try to solve it in his way with much tension and aggression. It’s just not his style to negotiate and make agreements.

He would have only one acceptable solution. In most cases that works for him,  but talking about relationships his inflexible nature can cost him many nice moments and women that are worth his times and love. Of course, it depends much of the Ascendant and position of the planets in the birth chart.

This woman is strong and you can really rely on her. She has penetrating personality and she will know you better than you know yourself. She will observe you and your habits, needs and she will exactly how to act around you.

She is nothing but selfish, and if she considers that someone is worth her love and attention she will make you her king and stay proudly near you.

Anything that she does, she does it with commitment and love. That means she expects it in return.

Mutual love and respect that is what she wants form her partner. Not only in life in general, then sexually as well.

She does love intense love making but nothing rough or violent. Passionate looks, sensual kisses throughout her entire body is what excites her.

She may loose patience if a man doesn’t know how to please her. She will loose interest because she considers that he already knows what to do.

She won’t be his teacher and won’t tolerate weak sexual energy. That just shuts her down. In that case, she will get along well with Aries as he is energetic and great lover.

Their needs can meet in this aspect but when talking about relationship, that can be challenging.

Even though she knows that Aries doesn’t hide things and his thoughts are in most cases transparent she will still ‘’dig’’ throughout Aries’ life just to find a smallest detail that proves that he might have hidden something from her.

When she learns that everyone has the right of privacy and doesn’t always have to share every single detail form life she can benefit from it more than she knows.

The constant doubt devours her and can take her to the point of complete destruction. Scorpios are destructive persons and you should not lie or mess with them.

If she feels betrayed, don’t think you will escape her. She will find you wherever you are and it will be over when she says it is over.

She likes loyalty above all and she will appreciate that more than everything that Aries will do for her. Her need to feel safe and secure and these inner fears may bring problems to her love life.

She seeks a partner that is completely devoted to her with all of his mind and body. That is what he is going to get in return, nothing less than that. If she feels that she is corresponded in the same manner she will do anything for him and will remain the only love in her life.

When Scorpio learn that her partner had life before her and let him have little space ,that can turn things into a different direction and in the direction  that she wants. Of course, it depends much of the Ascendant and position of the planets in the birth chart.

Scorpio is flirty just as Aries so both of the partners will enjoy this love game and there can be fireworks. This is not an exaggeration, there is a strong chemistry between Aries and Scorpio in most cases. Surely, they will enjoy this chemistry and have lots of fun.

Scorpio girl is not shy and that is a plus when it comes to Aries and his views about things in general. He likes open and strong personalities as he is like that himself.

They will get along very quickly and figure out  what each one of them want so there will not be misunderstandings. A look or touch is enough for these two to know how far they will go.

Often they can act abruptly but Scorpio is more finer in his intentions and acts. They are partners in crime, bed, love, bungee jumping,  sky diving, and many other activities that will probably include danger.

When it comes to love, in this case both of the partners will have to try to give their best for this relationship to work. If Scorpio manages to not ‘’suffocate’’ Aries and Aries tries to make a commitment this relationship might work. Many times they will experience situations that are too much to handle but eventually hard work can pay off.

The trouble may come when Scorpio gets too attached to Aries. If Scorpio woman finds a man who can satisfy her needs and fantasies , she can’t let him go just like that. Aries man doesn’t belong to anyone but himself and he makes it pretty much clear. They are actually quiet opposite and attract each other like magnets. In this part, they make a good team. The will understand each other the best in bed. Relationship may be questionable.

If they have an affair they can’t stay friends. This concerns Scorpio as she is not carefree and easy going as Aries. She takes emotions and relations very seriously and will not tolerate any kind of misconduct of her feelings.

If she accepts his nature and try to be more carefree, this friendship can work. Also, Aries will have to think less about himself and try to associate with Scorpio. The sooner they get this the sooner their relation will get better and have great time together.

They can be friends as long there is no sexual relation between them. Scorpio and Aries have pretty similar interests and they can enjoy their friendship doing many interesting activities such as extreme sports, investigation or being in the nature.

They can meet on the events with mutual friends, on parties, in the club or maybe somewhere by the water. They can also enjoy the music of their favourite band or go to an adventure park.

Since there is strong physical attraction and Scorpio can’t deny it for a long time ( Aries won’t do it as well) they will hang out together but be sort of ’’ friends with benefits’’.