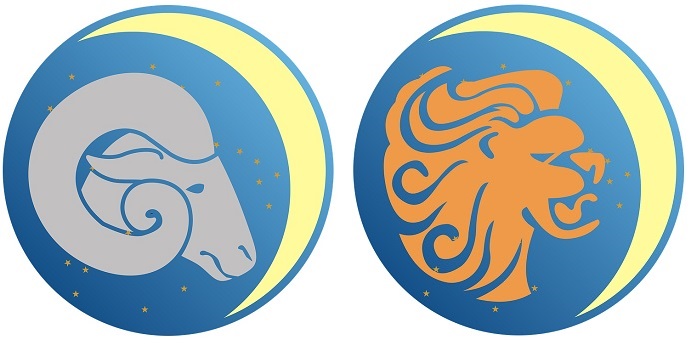 Combination of an Aires man and a Leo woman produces the hottest flame. The question is whether they would be able to stand it completely. This is an explosive match but offers both partners a lot of excitements and enjoyments. Passion moment is what makes them ultimately compatible.

The relationship between the Aries man and the Leo woman has many positive aspects, as both of them try to channel their energy into productive ways. Their egos might produce some tensions in the relationship, but if they find a way to handle each other in this aspect, they will achieve great things together.

Aries man is so temperament that he can’t even hide it. He likes leading and dominant positions, but is never bossy or unpleasant. This man always tries to do the right thing and to be fair.

A family is the most important thing in the world for the Aries man. Yet, he is completely boundless and immature in his younger ages, constantly looking for some fun and excitement.

After he lives through this phase, the Aries man is prepared for marriage and children. All he does when he is young, he does that bearing in mind that one day he will start a family.

You can expect that this man is successful in whatever he does. He has a good carrier, building his way through the top. Everything he does, he does easily and with a lot of energy and devotion.

As we mentioned above this guy is very temperament. That is why he should do some sports, as this is a great way to canalize all the excess energy. On the other side, by doing some physical activity, the Aries man might compensate whatever he misses in his life.

Aries man is never superficial. He cares about what he sees but is much more interested in what he feels. A beautiful but shallow woman will never grab his attention, as he would her as shallow. You should spark the interest within the Aries man by showing your originality and leaving an unexpected impression. Show him that there is much more within you than just the nice exterior. Of course, be careful as the wish to impress him might take you in the wrong direction. Be stable, nonchalant, charming, and show respect.

This man is not afraid of the challenges. As we already mentioned, he likes to be a leader. There is no fear of the unknown within the Aries man. That is why he would do anything he needs to win a heart of the special lady. Aries man takes time to settle down, as he waits to meet his soul mate. Once he does, he will true and honest to her.

Leo woman is one of the most loveable signs of the zodiac. She has her own flaws and weaknesses, but believe us when we say, you will love them too.

This lady is generous and big-hearted. She has that inborn instinct to help the others and even sometimes puts them in front of herself. You would never say this for the Leo woman, right? She is not shy or afraid to show her affection and emotions. Of course, make sure you respond to her with the praises and compliments.

Leo woman always speaks her mind. She is completely straightforward. Somebody would consider this as a flaw, but there is nothing more admiring that a person who is frank about everything. She might sometimes be tactless, but her intentions are well. Even if she says something in a rude way, this is for your own good. Leo woman wants the best for those who she loves, so her criticism might benefit you. You will thank her later.

This woman is confident. She is aware of the attention she draws whenever she appears. If there would be a hundred women in a room, you would still look at her only. Even she is aware of this, and once she lays her eyes on a man, she knows the right ways to make him approach her. She is sexy, charming, and a bit provocative. Leo woman needs a strong man by her side, but not someone who would try to tie her down. Her fiery energy needs freedom. Only like this, the Leo woman would give the best of herself.

Relationship with the Leo woman is a gamble in some aspect, but it is definitely worth a try. You will learn a lot more about her, but also about yourself. Maybe you two are not meant for each other when it comes to romance, but the Leo woman can be a great friend also.

Aries man knows how to make his partner happy and fulfilled. However, he does not put her on the pedestal, as he believes he deserves it. Leo woman, on the other side, expects her partner to truly admire her and to put her in the first place. Yes, this might be the first challenge in the Aries man and Leo woman’s relationship but it won’t go further. Leo woman would realize that the Aries man would love, appreciate, and respect her, so she would ask for nothing more. Even the Leo woman’s notorious bossy and dominant side would bow down in front of the Aries man.

Yet, she won’t lose things when it comes to other aspects of life. Aries man will find it a bit difficult to cope with the Leo woman who refuses to be submissive. Their egos will clash sometimes, but they both have to accept it. Leo woman would want to compete with her partner when it comes to business. And, what is more, she will beat him in this sense, at least for an inch. However, the Aries man would find this imaginary battle interesting sometimes.

On the other side, none of them can take the criticism well. Their temperaments are too sensitive when it comes to this matter. It doesn’t matter if the criticism may do them good, these signs are fiery and explosive. But, the good thing is that they will stay away from mutual provocations, which will prevent peace in the relationship.

It would be tough for a calmer sign to handle the Aries man’s or Leo woman’s energy and ego. Yet, these two find a lot of positive sides in each other. This couple will try to turn their flaws into benefits, and these tactics would work great for them.

One more thing in common is the sense for adventure. These two will go to many places together. Staying in their home for days is not their thing at all. Aries man and the Leo woman will always come up with some new, original ideas.

Aries man and the Leo woman share the true instinct for passion. You probably already know that there is no great passion without at least some possessiveness. Aries man and the Leo woman are both possessive, achieving a high degree of desire for each other. These two will dedicate everything to each other solely and that is where the possessiveness comes from. This is a win-win match when it comes to intimacy, as both partners enjoy physical pleasure. Did you have any doubt that the Fire signs would be compatible in the bedroom?

Leo woman has high standards when it comes to partners, but also when it comes to her friends. Her friends, or her best friend, would have to put her in the center of attention, and she wants everybody else to see it. Aries man is more independent, not caring so much about the endless attention of his friends. Both signs appreciate loyalty the most.

You can do and say anything you want to the Aries man or to the Leo woman, but if you betray them, you put an end to your friendship. As both of them share the same values, they will never hurt each other in this aspect.

If they work together, it is a bit more likely that the Leo woman would be a boss. Yet, don’t underestimate the Aries man’s leadership skills. She craves for high positions, but never acts arrogant or imprudent to those who work for her. She functions great in a group environment and she is always a team leader. Aries man is less likely to work with someone. He is more of a single player. Yet, as their energies are similar, the Aries man and the Leo woman would have many touching points here.

The proof how the Aries man and the Leo woman attract each other are many Hollywood couples, such as Al and Tipper Gore, Gabriel Aubrey and Halle Berry, Warren Beauty and Madonna, and many more.

When you think about the Aries man’s and the Leo woman’s ego and the desire to be leaders, you might think that these two will never make a connection. You would be wrong. T