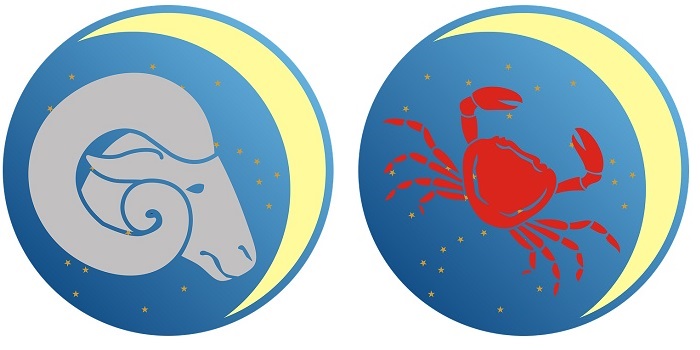 The real word that could describe the relationship between Cancer and Aries is total diversity. The combination of fire and water is not always an ideal combination.

This is probably one of the toughest combinations in the horoscope, precisely because of totally supercritical attitudes and views of life. Do you want to know why? Continue reading!

Aries is all that a woman’s cancer is not. Dominant, strong, ready for everything and eager to prove the point in every moment.

The big problem that can exist in this sign is the fear of defeat and the acceptance of defeat. Aries can’t accept that easily, and for this reason, he reacts violently.

In the business world, with friends and family, he is very honest and always tries to maintain a good and positive attitude.

He likes to work, to get educated, and to constantly learn new things. That’s why he likes to be in the company of educated and smart people who are full of new ideas.

He does not like to analyze the situation too much, but just to do the first thing that comes to his mind. That’s why things often go wrong.

Because of his desire to prove and desire to show how strong he is, he can often neglect important people and put them in a second plan. He does not do it deliberately, but sometimes he can exaggerate, until someone tells him whether he is doing the right thing or not.

It is very important to him how he looks at society and how he acts, because his reputation is one of the most showing caracteristics.

He will not hide the smile if you give him a good compliment. He likes to wear sporting things, especially those marked, but he doesn’t like suits and formal dressing.

Although you would never say that he is like this, he feels special when he has a strong and nice partner beside himself who can point him to some mistakes he makes in everyday routine, but also to support him at any moment.

He is very romantic, but he can exaggerate if the other side does not set clear boundaries in the relationship. You should not be surprised if an Aries buys you flowers or a book that you have watched for so long in the shop window.

If he finds the right person, any habit he has can change, with little effort and little time.

In everything he does, he has to be the first. If he does a job that requires a long sitting in the office and in which there is not much fun, an Aries gets bored and quickly leaves the workplace.

If he is training a sport, he always takes the captain’s seat. He does not surrender without a fight and does not like when someone does not play by the rules.

He is serious even when it comes to the smallest details, he wants everything to be perfect and he is trying not to have any problems at work and in the relationship.

If we mention sexual life, an Aries is very demanding and entices maximum commitment and passion from the partner. He does not like the same things, so every time he tries something new.

For an Aries man, you must have strong nerves, a firm attitude and a lot of time to devote to him.

Sensual and gentle but at the same time strong and fierce. Thousands of feelings hide within themselves, she does not reveal her emotions, just as the crawfish hides under its shell when it feels that it is in danger.

Cancer woman is a specific sign of a horoscope because she is very attached to family and family life. She likes very children very much and she usually has many children and a harmonious marriage.

She is very sensitive and she can take care of herself the best, but mostly for her family, partner and close friends.

She likes to hear everyone’s problem, to think and help in the best possible way.

She keeps her problems for herself and solves them in her 4 walls. She shares her morning coffee and her free time with her family and people who are very close to her.

Going to the park and walking by the river are the things that are most relaxing for her.

In addition to great sensitivity, she is also a very positive person. She believes that everything will end properly and that any situation can be solved peacefully. Violence and arrogance do not exist in her vocabulary – she is very calm and thinks that good talk can solve everything.

If you are dear person to her, she can easily forgive you every mistake and quarrel.

She expects friends and partner to respect her every rule, and to never try anything that she does not fully support.

The big problem for her is that she is often hurt because she reveals her emotions too much and puts herself in another plan. It is a big disadvantage that she respects other people more than she takes care of herself and about what she thinks is right to do. She always blindly follows a person if she trusts him immensely.

She loves to get beautiful compliments, gifts and little signs of attention from her friends and partners.

With her you can experience the most beautiful emotions, lots of drama but also many strong and sincere feelings.

The house, the yard and the place where she lives always has to be beautifully arranged, neat and clean. The people who come to her home are often fascinated by the appearance of the interior and the things that she has.

She is very emotional, so you can often catch her listening to sad songs or watching movies that remind her of something nice.

She is always happy, smiling and ready to help people with whom she spends time. She does not allow people to see her sad and unhappy.

How devout, sincere and strong she is in the relationship, we will talk about in the next section.

Cancer women are very attached for people, but they are very often hurt because they want to give everyone a chance.

They are very gentle and kind to their partners, they always give a second chance, even if their partner does something worth breaking up.

She would not get angry even when her partner does not answer on their phone, when he does not respond to the messages, because she thinks that all this is just a passing phase.

She loves, respects, and trusts his partner, but goes to a “higher level” only when she feels she is ready enough and that the partner loves her as much as she loves him.

But, Aries man needs to calm his passion because Cancer woman is not as temper as him.She wants everything to be slow, full of love and kindness.

Aries man sometimes rush Cancer, and tries to atract her as soon as possible.That is because Aries is strong, independent and wants everything to be his.In his head, he can have every girl he sees, but that is not always situation.

When she feels safe, Cancer woman will let the fears go and jump to a new adventure with her carefully selected partner. Surprisingly, she is very active and relaxed in bed, but only with a man that she feels safe with.

Another problem is that Aries loves parties, loves to be seen, but his other half in this case is tottaly different.

They need to make compromises if they want to succed.It is extremely hard because they are two different worlds and personalities.

We will not talk much about the friendship of these two zodiac signs. It is very difficult for them to make the first step, just because an Aries is by nature a more social type, while you can not see Cancer woman everywhere and with everybody.

Even if they become friends, there will be plenty of quarrels over disagreements in attitudes.

Cancer woman will constantly complain to an Aries man how he needs to calm down, think, and then make the first step.

Aries does not like when he is wrong, and everything that is not correct in his opinion, he does not accept as an option.

For example, if they come out for dinner, an Aries will order everything he likes from the menu because he is a big hedonist, while the Cancer will try to save every coin.

As far as business relations are concerned, this is not the most brilliant combination. Cancer woman is not someone who is capable of running the company, precisely because of her senitive side and desire to always help people.

I hope you have not much disappointed in this article, precisely because of the disagreement between these two horoscopic signs. Cancer woman and an Aries man have a very demanding connection, and require a lot of compromise, big fighting and perseverance.

If you have the desire to succeed with the opposite sign, prepare your nerves, a lot of good mood and strength. Good luck!