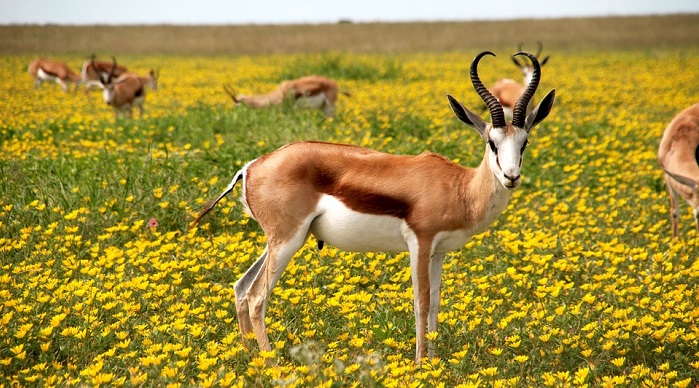 Antelopes are actually a large group of similar species of cloven footed animals, but true examples inhabit only African and Asian continent. In African folklore, there are many folktales and superstitions about antelopes.

An interesting fact about these slender and fast beauties is that they have been living near humans for centuries, but they were never completely tamed.

However, there are few species people were able to domesticate.

Antelopes are many and they vary in size and appearance. There are tiny, timid, small ones and there are big and stronger varieties.

Most of these animals have light brownish to beige coat, but there are some with stripes, dark brown, black or silvery white fur, as well.

Antelopes have amazing horns and the shape of those horns varies a lot, depending on particular specie.

Some of the most popular antelopes’ species are impala, dama gazelle, addax, blackbuck, oribi and so on;

When we talk about antelopes in general or interpret their symbolical meaning, we usually think of a brownish, sharp horned, graceful and slender animal.

We just simplify our idea of antelopes and imagine a single animal featuring main antelope’s traits and characteristics. 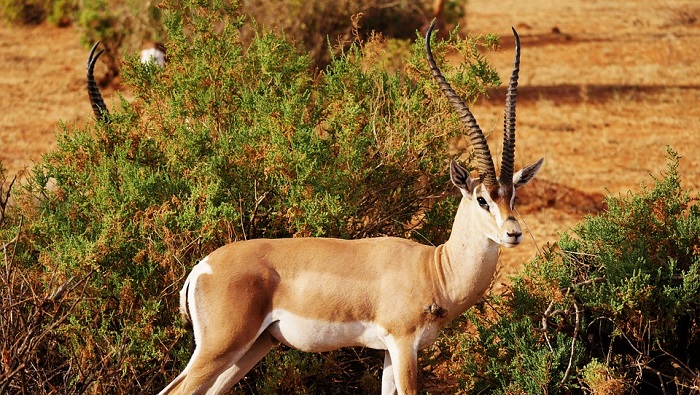 In Africa, there are many beliefs about antelopes. For example, Liberian people find the Royal Antelope a symbol of great intelligence, knowledge, wisdom and speed.

This tiny antelope is of a small size compared to others and it is also called ‘the king of hares’. Its name Royal Antelope originates from this folklore title.

Antelopes’ horns have great spiritual and medicinal value in different cultures and societies around the world. It is believed their horns possess magical powers and the ability of healing;

Many different healing and magical properties are ascribed to antelopes’ horns. For example, horns of saiga antelope male are believed to induce sexual energy and the medicine also works as an aphrodisiac.

Chinese have believed this antelope medicine is so powerful that this specie almost faced total extinction, back in the day.

Today, saiga antelopes are on the list of endangered species. In the late 90s, their population counted about one million living animals.

Antelopes also have a special place in Christian tradition. They are often featured in heraldic and religious art.

Antelopes are also valued in Hindi tradition because of their speed and agility and they are usually associated with power of the wind.

Antelope shaped and designed masks are to be found all around Africa. One of the best examples is Chi Wara god mask. Chi Wara mask is characteristic to Bambara people from Mali.

It is usually designed as a facemask or a headpiece that represents their agricultural deity of that name;

Antelopes’ symbolical and spiritual meanings mostly originate from folktales and local beliefs. These animals are seen as swift, agile, intelligent and elegant spirits that are hard to tame and make obedient.

They represent ideas of speed, freedom, intelligence, beauty and agility.

Speed – Antelopes are very active, energetic and fast animals. They are always on the watch. Their excellent senses make them able to notice the smallest signs of danger and safe themselves. Antelopes run very fast, they jump with amazing skills and elegance, as well.

Their slender bodies look impressive while they run over the savannah! These beautiful horned animals are excellent racers, so they always stand as a symbol of speed and swiftness.

Elegance – Antelopes appear graceful and elegant. Their bodies are fit and agile and their beautiful horns look impressive. Antelopes usually have big, bright eyes with charming lashes. Their fur could be of different colors, but almost all species look beautiful and sophisticated.

A long time ago, Europeans were fascinated by stories about these exotic and strange looking creatures. Antelopes are generally associated with ideas of elegance, tenderness and grace.

Intelligence – Antelopes are intelligent creatures because they have so many enemies in their natural habitat. They need to have wits to outsmart much stronger, vicious animals, such as lions, for example.

They are aware of their skills and they combine them in order to survive the cruel law of savannahs and other places they live in.

Freedom – As we have mentioned, antelopes are not easy to tame, even if there are species people accomplished to domesticate. They run over vast spaces of Asian plains and African savannah and enjoy their freedom.

Antelopes may appear delicate and fragile, but they are able to endure long runs, different natural circumstances and know how to outsmart their enemies.

Antelope as totem and spirit animal

Antelope totem gives you powerful energy to achieve your goals. It also offers you the gift of sophisticated senses and nurtures your confidence and self-reliance.

Antelope people are intelligent, active, energetic people, with a good sense of their environment and other living beings.

They are observant, elegant and graceful individuals. These are their main traits.

Antelope people are doers rather than thinkers, although they have a high level of intelligence. They learn fast and easily apply what they have learned.

They use their good intuition while evaluating circumstances or their relations with other people. They are never to be manipulated or deceived.

Antelope people are extremely skilful and good strategists. They are supportive friends and amazing people to work with. They never hesitate to do something, but sometimes could be too rushing, which may turn a disaster.

Antelope individuals have impressive sense of aesthetics. They have great taste and knowledge of art and fashion, for example.

They also express good manners; they act with grace and are very polite. Antelope people are communicative and it is always enjoyable to have them in your company.

These stylish, intelligent people are inspiring and charismatic individuals who stand out without forcing it so.

They are charming, lovable and impressive in every sense possible.